I was in the process of doing my power-walk from 34th street to 96th street, when this sweater broke my neck.  I do my best to not be a rude New Yorker. I know how we hate when tourists stop in the middle of the sidewalk without warning, but I was stopped cold by this enchanting sweater, simply beaming in the window of Lord & Taylor. I was frozen on the spot. I immediately took out my phone and positioned myself to take this photo.

Without warning, or possibility of cessation, the true New Yorker in me came out. My side-eye dared anyone to pass in front of me while I was trying to get my shot.

Isn’t she beautiful? I would have preferred this Maria Dora: Tsunami Sweater in an off-white, gray, or Cream color, but the store only had it in Foam. Tshawn from Lord & Taylor helped me to get a closer look at it. He was cute and helpful… but I digress.

But there is nothing simple about this sweater. It is the well thought out shape and perfectly placed detailing that makes this seemingly simple design, a stunning statement piece.

Without the draped wool strands in the front, and the Garter Stitch accents, this sweater would be hiding on a rack, where it would belong, with all the other nondescript factory cutouts. There was thought put into the finishing of this sweater, and it paid off in the final product being worthy of an L&T store-front display. 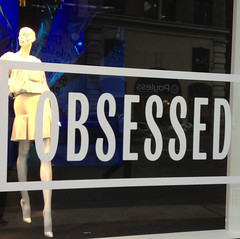 The window display hit the nail on the head, because I am so obsessed. How elegant does this sweater look?  In my opinion, too many knit & crochet patterns focus too much on intricate stitch variations and complicated techniques and cables. Don’t’ get me wrong. If we are serious about the craft; as we should be, learning these design elements is crucial.  These techniques should be a solid part of our arsenal, if we intend to fight the true Yarn-Addiction fight with fervor and pride.  However, beautiful garments can be made with simple stitches too.

Kick It Up a Notch

There are other elements that provide the same quality of intricate detailing, as well as other forms of bells and whistles that will make our garments sing. As long as we don’t throw them all into the mix at once, they won’t be singing off-key.

Detailing, such as the one showcased on the front of this sweater, is not often seen in standard patterns. How do you even describe this in a knitting pattern?  I’m quite new to knitting, so I don’t know exactly how it would be explained, but I do know that it is not attempted often enough, especially in patterns for beginners. This is understandable, but I don’t believe it should be expected.

Yarn craft is an art.  Sometimes we have to step away from the color by numbers template and throw a few Jackson Pollock moments into the mix. This uncomplicated sweater pattern became an exquisite work because someone at Maria Dora decided that the little cropped Stockinette Stitch Sweater, with the Garter stitch accents, needed to be kicked up a notch. Maybe it needed to brandish a few strands of flowing loose yarn as a front line embellishment. To me, this shows respect for the art of garment making.

I have no problem with a classic cardigan or sweater pattern that uses intricate cable work, Fair Isle or Intarsia, but I think it is a great disservice to yarn craft if the artist does not include his or her own art expression in the finished piece. It should be contemplated, even if it only means adding a few calculated and carefully placed statement buttons or stand out stitch detailing.  Sometimes that extra addition is what makes it sing to your soul.

Don’t let it just be a sweater. Let it be an extension of you.  In most cases, it’s not ideal to let our yarn roll, spool or hang, but if by doing so, the garment is lifted from the audience and placed on the stage, then by all means let it fly.

We’re not just knitting and crocheting, we are crafting wearable art. We must not be so quick to forget about the art part.