Happy Halloween! This is me as Death, from The Sandman Comic series… well sort of. Well I was wearing all black, now wasn’t I? Plus I had the little signature curl under my eye.  Ok, it’s not that easy to see with my glasses, but it was there. It was actually cute too. Lol!! And yes, I was supposed to be wearing an Ankh instead of a Prince Symbol. But that would be asking too much. Ok, I was visually so far from that character, it’s not funny. But I had her in my heart.

I am blessed to be posing with the official Scary Godmother at the 2013 Comic-Con. I didn’t go this year, but it’s not like I could top this? I got to meet one of my favorite Comic Illustrators; the beautiful, and incomparable, Jill Thompson.

I had read and loved Neil Gaiman‘s “Death: The High Cost of Living“. It was a very refreshing perspective on the Death character. I mean, come on.  Death as a top hat wearing Goth chick? Pure genius. I had seen Jill’s name here and there on different comics, but never committed it to memory. One day I was going on a long car ride somewhere, with my purple sister Roxanne and a few others, so I stopped in the Forbidden Planet comic book store to pick up some light reading for the trip. I knew they were ready to leave and I didn’t want to take forever trying to pick a book, so I just looked for something that jumped out at me.

I saw a red and black cover with a little doll-like figure on it. She had a curl under her eye and an ankh, just like the Death character from Neil’s book.  I immediately snatched it up.  Whatever it was, the cover alone had me at hello.

I spent the entire ride in side-splitting laughter–several times, to the point of tears.  The characters are the most adorably hilarious characters I have every seen. I have read that book so many times, I feel as though I have become one of its characters.  My daughter even read and loved it. That’s when I knew I had found another artistic soul to love.

Yes, I Went to Comic-Con

I wasn’t going to dress up for Comic-Con. I was just going 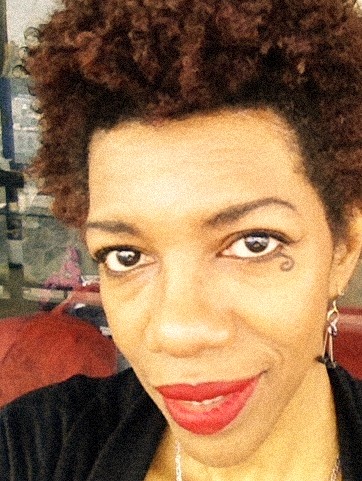 to show up, but when I saw Jill’s name on the roster, I knew what I wanted to do.  I struggled trying to get that curl under my eye, just right. I finally headed to the Jacob Javitz Center. My first Comic-Con.  I was floored and totally overwhelmed. We were packed like sardines. Inching along on tip-toe, I glared over heads in utter amusement. There were people at every turn. Beautiful people and beautiful things. Then there was Jill.

The moment I turned the corner of the ‘T’ section in Artist Alley, that lovely red hair caught my eye. She was so beautiful. I didn’t know what to say when I saw her sitting at her table–sketching. I wasn’t sure if she had already grown tired of all the attention. But she was so warm and inviting. All people should act this way. I know it’s not easy to be eternally gracious, especially if you are constantly in the public eye, but it’s so amazing when you see someone who has not fallen into the standoffish pit. She hugged me and asked a passer-by if they would please take a photo of us. She even autographed my constantly read, horribly worn out copy of “Death at Death’s Door”. That book has brought me countless hours of joy. I’m eventually going to have to buy a backup copy. 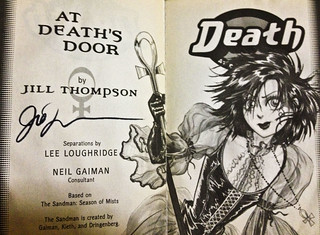 Jill is an amazing artist, and a beautiful person… inside and out, and I am most honored to have met her and experienced her laughter inducing artistry.

2 thoughts on “Happy Halloween from Death and Scary Godmother!”