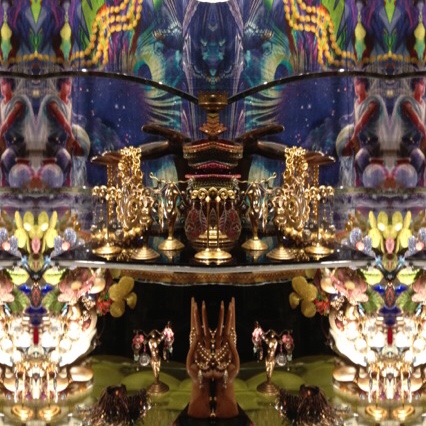 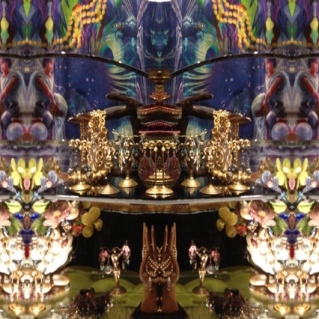 The circumstances behind Prince’s passing are still being mapped out, and I’m still waiting for closure. I saw a post on Twitter from QuestLove saying that we should read every single word in the song “Let’s Go Crazy”. Prince has always been seen as cryptic, but it’s just so intense right now. Given the current state of things, it’s actually rather haunting.
Let’s Go Crazy Lyrics On Google Player
I’ve listened to this song thousands of times, and even mulled over the lyrics back when it was released. We always talked about his cryptic nature, and I was ok with that. I did my best to decipher everything, and try to understand–make sense of it in my own way.
Annie Christ Killed John Lennon
Growing up in my teens, I found Prince’s artistic abilities fascinating. My parents weren’t so happy about some of the things they read about him, and didn’t think he was good for my spiritual development. Especially since I had just transferred from Catholic school into a public school environment. I was determined to prove to them that he had a very strong spiritual side. I went through his lyrics, searching for anything that drew upon or conjured up a positive spiritual experience. I found the perfect one in his song “Annie Christian”.
“Annie Christian, Annie Christ, until you’re crucified, I’ll live my life in taxicabs.”
What do we do in taxi cabs? We get away from our current setting, and travel to a more desirable place. This was it. My grandmother was always talking about this horrible person Annie Christ. She never said antichrist, she always said Annie Christ. She would say things like, “That Woman is older than Annie Christ, or These people are as wicked as Annie Christ.” When I was much younger, I actually thought it was some mean lady she knew. So I was floored when Prince used this term. I immediately ran to her and told her about it. I said, “Prince said Annie Christ killed John Lennon.” She said, “His people must be from the south.” I didn’t understand what that meant, and I still don’t, but I went on–deeper into some of the things he discussed. She finally said, “Well he’s right then.” That was the response I needed. I went to my mother and relayed everything I had learned, and said, “See, he can’t be bad for my spiritual growth. He’s not a bad person; he recognizes the true existence of bad.”
Unfortunately, too shortly after I built up this obsession with finding more and more spiritual references in Prince’s work to share, I lost my mom. Without my mom, my rock, I chose to use Prince’s words, lyrics and spiritual inflections to reconnect with God on a different plane, and grow into the person I am today.
Purple Parenting
When I had my daughter, Prince became my role model for raising her.  She grew up on phrases like, “Why are you trying to be like everyone else? Do you see Prince trying to be like everyone else?” Or  “You just have to be the person you need to be. Do you think Prince would let people tell him what to wear or how to think?” It was all I knew, so it was what I could offer her. I went to his lyrics and speeches for guidance. I didn’t have my mom, so I needed someone to look up to and learn from. I not only needed him to guide me, but also to help me guide her in the right direction. At some point, I would like to elaborate in detail on the specific things I drew from, but right now I’m still in a period of grieving. Today I realized just how much she benefited from everything I had to give.
It’s All In There

After reading the lyrics to “Let’s Go Crazy” again, I immediately burst into tears. I responded on QuestLove’s post.  I said,

It’s all in there.” After crying my eyes out over the haunting, currently uncanny accuracy and validity of the lyrics (written sometime in 1983/1984) to what we are witnessing today, I texted my daughter about it. She had already revisited the lyrics upon his passing. I sat drowning in tears, staring at the little bubbles on my phone, notifying me that she was responding.

She sent me the following messages: 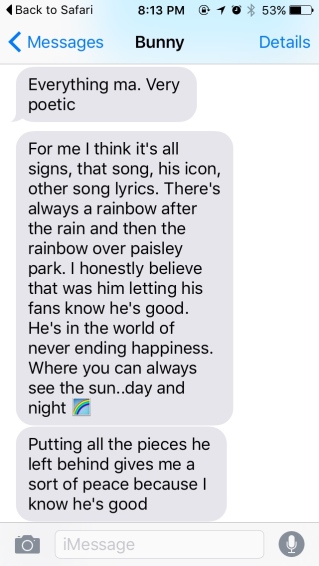 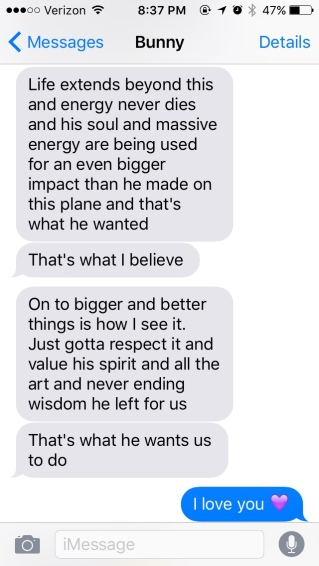 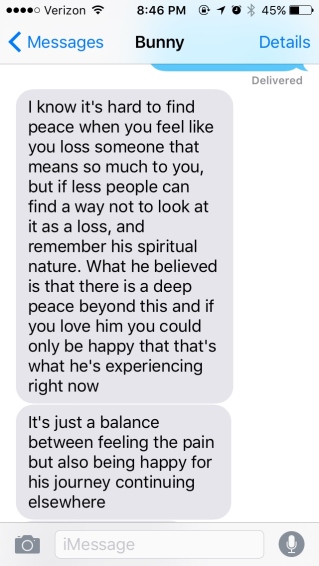 Sending this telepathically, I so deeply want to thank Prince for helping me to raise this amazing woman. I feel so thoroughly bathed in God’s light. It feels good to know that my mentor is in a world of never ending happiness, where he can always see the sun/son, day or night.

️
Many blessings to all, and may we all find our way to a brighter place.

9 thoughts on “A World of Never Ending Happiness”